Prayers for the Start of a Journey

The Rosary: My Weapon of Choice

For more than ten years – since I re-met my wife, started dating her, realized my vocation to marriage with her, and started a family with her – since I stopped considering what I had thought might have been a call to the Catholic priesthood, I’ve contemplated and discerned a possible call to the diaconate.

It’s important to note that that’s not a “replacement” calling – it’s an entirely different calling. The deacon is not ordained for the same sacramental realities that the priest is; and, in fact, a permanent deacon who is married has other sacramental realities that are priorities in his life as well, by virtue of the Sacrament of Marriage. The diaconate has been ill-served in recent years by our Catholic faithful perceiving it as an “other” calling than the priesthood, though – it is in line with the priesthood, but a lower order; it is charged with helping to preach the Word (in word and action), offering the prayers of the Church, serving (but not as a priest) at the altar, and leading in taking that service and call of the Word into the world.

From time to time, the whisper that I think might be a calling gets louder, or sometimes quieter. But it’s always, undeniably, there. There’s a certain fear that comes along with it – not a fear of what accepting that call might bring, but rather a fear of whether what I’m feeling and hearing is truly a call at all. The simple fear of discerning “incorrectly” is a very, very strong fear.

That said, a few weeks ago, a series of signs happened in my life (again.) First, this – a comment thread when a priest of our diocese posted a link to a study our diocese recently co-released with Benedictine University on why some Catholics stop practicing their faith, and why others remain: 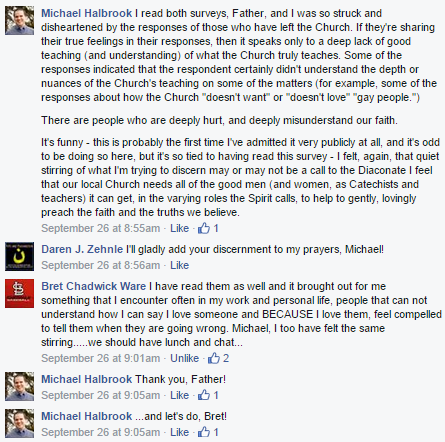 That’s the first time the cat’s truly been “out of the bag”, as they say, other than with my wife.

Then, that weekend, the homily at Mass was very much about not withholding your knowledge, gifts and talents when you’re called to share them.

Then, that same weekend, this appeared in our parish bulletin:

Then, I had some intense prayer around the time of my own patronal feast, the Feast of Saints Michael, Gabriel, and Raphael, Archangels.

After discussing with my wife, we decided to attend. As it ended up, another good friend and his wife from our parish are also going. It should be a nice trip to our Cathedral (about 1 1/2 hours north) to find out more together.

I don’t know where this first step on this journey might lead. I don’t know if I’ll apply, if I’ll be accepted, if I’ll go all the way. But I know I’m saying my first “Yes” at this moment.

This Sunday’s Gospel is the Parable of the Wedding Feast. In the parable, the king continued to send messengers to invite his countrymen to the wedding feast for his son. Many repeatedly ignored the invitation. I hope that, if I’m truly being called, that I am aided by grace in knowing what to do and when. Also in the parable, when one man showed up for the feast, he was clothed inappropriately and thrown out. I pray that if I’m truly chosen, I’m able to be, and remain, clothed in grace and a life worthy of this calling. 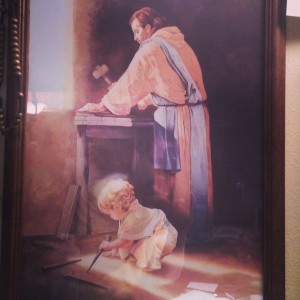 By grace, I just recently noticed something interesting about this print that hangs just to the side of my desk in my home office.

Joseph, the dad hard at work in his shop, with his son (Jesus) playing at his feet, bears the sash over the left shoulder of his tunic – the sash of a deacon.

When we talked about the meeting with our boys at dinner last week, it was a great conversation.

The next morning, while driving somewhere in the car, our second, Matthew, said, “Dad, I think you’d be a good deacon, because you love God, you know so much about Him, and you love to pray Morning Prayer every day.”

That sums it up, I think – if this calling is real and true, I feel deeply that it’s in part because God has given me so much love, passion, and knowledge to help serve effectively: the Word, at the altar, and in the world. Such is what I know to be the service of a deacon.

Mary, ask Jesus your Son for grace and guidance for me, please.

Friends, please pray for Suzanne, the boys, and me.

Profession of Faith & Oath of Fidelity