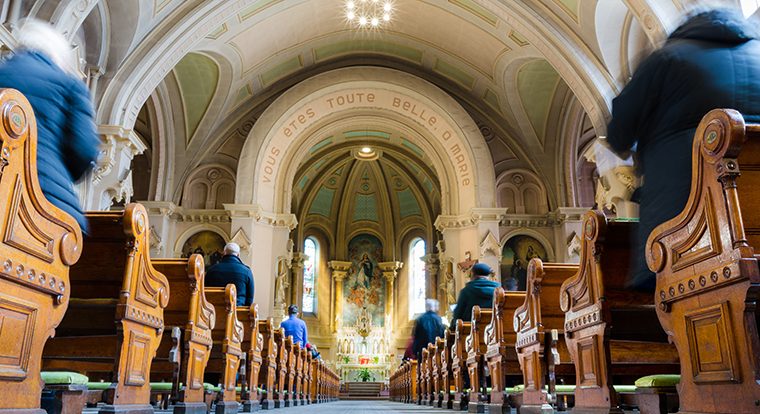 Of the four Constitutions resulting from the Second Vatican Council, Sacrosanctum concilium, the Constitution on the Sacred Liturgy, was the first discussed and approved, and it was promulgated by Pope Paul VI on December 4, 1963, a year after the council opened.1  This Constitution had significant effects and led to a stark reform of the liturgy in the years just after the council, and it continues to impact the Church’s liturgy today. However, some of the ideas found in the document are still being addressed or contradicted in practice in many places today.  Liturgy remains one of the most controversial areas of reform in the years following the council.  On one side are those who advocate “the spirit of the council,” seeking to interpret the intent of the council fathers and enact liturgical changes in line with that interpretation. On the other hand, others favor a stricter interpretation of the council documents and more rigid adherence to tradition while still enacting the reforms for which the council called.

The debate over the liturgy seems to be at fever pitch today on blogs and in parish meeting rooms.  In an article relaying events of a Jesuit liturgical conference in Rome in June 2002, Cardinal Godfried Danneels of Belgium was quoted summarizing the issue, “If Catholic worship before the council suffered from exaggerated ‘discipline and obedience,’… today in the rush to develop ever more creative liturgies, the ‘sense of mystery’ may get lost.”2  However, this debate is not a new area of discussion and divide. Five short years after the council, the Sacred Congregation for Divine Worship’s Liturgicae Instaurationes detailed the challenge of the day, and it sounds like something right out of today’s discussion:

“there have been here and there both resistance and impatience. In the cause of holding on to the old tradition, some have received the changes grudgingly. Alleging pastoral needs, others became convinced that they could not wait for promulgation of the definitive reforms. In consequence, they have resorted to personal innovations, to hasty, often ill-advised measures, to new creations and additions or to the simplification of rites. All of this has frequently conflicted with the most basic liturgical norms and upset the consciences of the faithful”3

From the days just after Pope Paul VI promulgated Sacrosanctum concilium, its effects have been broad and far-reaching, but still haven’t been completely on target.

One might ask what the council fathers intended as a result of Sacrosanctum concilium.  A strict reading of the outline of the document provides a handful of intended principles. First, the council pointed out “the nature of the sacred liturgy and its importance in the Church’s life.”4  Then it called for the “fully conscious, and active participation… by the Christian people, as… their right and duty by reason of their baptism,” the proper training of the clergy in liturgy, and “the liturgical instruction of the faithful.”5  Next it called for “a general restoration of the liturgy itself, [in which]… both texts and rites should be drawn up so that they express more clearly the holy things which they signify,” which reiterates the Church’s authority to regulate the liturgy, and permits “no other person, even if he be a priest… add, remove, or change anything in the liturgy on his own authority,” and stressed the role each person plays based upon their rank or office. It also called for more reading of scripture within the liturgy, the proper placement of preaching, and for adapting the liturgy to the language, cultures, and traditions of peoples.6

In addition, Chapter II of the Constitution covered more intended changes specific to the Mass, including parts of the Mass to receive new emphasis (the homily, the Prayers of the Faithful), and expanded permission for concelebration.7 Chapter III-V covered changes to other Sacraments and sacramentals and renewing the structure of the liturgical year.  Finally, Chapters VI and VII covered music and art, calling for liturgy “celebrated solemnly in song, with the assistance of sacred ministers and the active participation of the people,” giving Gregorian chant pride of place.  But it also permitted other types of liturgical music, allowing for adaptation to local musical traditions and customs.  The pipe organ was given “high esteem,” but the admission of other instruments was permitted, “on condition that the instruments are suitable, or can be made suitable, for sacred use.”  They called for composers and other artisans to bring their skill and talent to the renewal of the liturgy, contributing “art which is truly sacred… [striving] after noble beauty rather than mere sumptuous display.”8

Which of these changes have happened?  The “ordinary form” of the Mass, the Novus Ordo Missal first promulgated in 1969 and its subsequent revisions, have accomplished the renewal of the liturgy itself, restructured the liturgical year, and made room for more reading of scripture within the liturgy. In addition, it has given elements like the homily and Prayers of the Faithful their proper place, and allowed for concelebration. There seems to be a better sense of the nature of the sacred liturgy and its importance in the Church’s life.  The faithful now take a more conscious, active participatory role in the liturgy in many places.  National Directories for formation of priests and deacons call for the proper training of the clergy in liturgy (a structure begun with the Council of Trent).  Moreover, in many places, the liturgy is celebrated well and with good music and art that are truly sacred and strive for noble beauty.

On the other hand, the liturgical instruction of the faithful could be improved, and perhaps deeper liturgical instruction is what some of the “missing faithful” might need to better appreciate the liturgy.  Furthermore, the liberty that some clergy take in adding to the rite could be tempered in the spirit of the council’s desire that “no other person, even if he be a priest… add, remove, or change anything in the liturgy on his own authority.”  In the Church in America, music has been an area of diversity and strength, but re-balancing the use of Gregorian chant to give it its “pride of place” would be one way to further align with the desires of the council.

Another area of consideration as it relates to the intent of the council fathers is that of adaptation in other (particularly non-Western) parts of the world.  To understand the gravity of the need for adapting the liturgy in other cultures, one might reflect on the reaction of Cardinal Joseph Malula of Kinshasa in the Congo, to the liturgy when Pope John Paul II became Pope.  He stated, “All that imperial paraphernalia…  All that medieval remoteness and inheritance that makes Europeans think that the Church is only Western.  All that tightness that makes them fail to understand that young countries like mine want something different, they want simplicity.  They want Jesus Christ.  All that, all that must change.”9  The spirit of Cardinal Mulala’s reaction can be seen within paragraphs 37 and 38 of Sacrosanctum concilium:

“Even in the liturgy, the Church has no wish to impose a rigid uniformity in matters which do not implicate the faith or the good of the whole community; rather does she respect and foster the genius and talents of the various races and peoples. Anything in these peoples’ way of life which is not indissolubly bound up with superstition and error she studies with sympathy and, if possible, preserves intact. Sometimes in fact she admits such things into the liturgy itself, so long as they harmonize with its true and authentic spirit. Provisions shall also be made, when revising the liturgical books, for legitimate variations and adaptations to different groups, regions, and peoples, especially in mission lands, provided that the substantial unity of the Roman rite is preserved; and this should be borne in mind when drawing up the rites and devising rubrics.”10

In Liturgy and Inculturation since Vatican II, Where Are We? What Have We Learned?, Mark R. Francis, CSV points out how the Roman Missal for the Dioceses of Zaire, one of the first attempts at inculturation of the Roman liturgy in Africa, has elements that flow directly from African culture while still being patterned on the structure of the Roman Rite. Among these are the invocation of saints and ancestors at the start of the liturgy, the placement of the penitential rite just before the sign of peace and preparation of gifts, the use of dance, an “announcer” calling the assembly to worship paralleling a servant announcing the arrival of a chief.11

Turning to India, Francis writes of a proposed outline endorsed by the Indian bishops and approved by Rome that is “…known as the ‘Twelve Points of Liturgical Adaptation’ and opened the door to particularly Indian liturgical gestures and other symbols. Among the Indian cultural practices permitted in the Eucharist were semi-prostration instead of genuflection, an Indian style of incensing, offerings of flowers and fruits, and the use of Indian musical instruments.”12

A tidal wave of change hit the Church after the Second Vatican Council.  Some of the biggest waves hit upon the liturgy, the first area touched by the council.  The liturgy is “the outstanding means whereby the faithful may express in their lives, and manifest to others, the mystery of Christ and the real nature of the true Church.”13  It is precisely the liturgy that needed to undergo change to bring the faith into the modern world.  The council fathers, however, seemed to indicate a desire for change balanced with tradition.  Some of the liturgical wishes of the council fathers remain outstanding and some have been addressed differently than imagined.  Still, the Church seeks to bring the true “spirit of the council,” a true encounter between the Church and modernity, into reality in a balanced way, to get the Rite right, as the council fathers intended.

Please note: I reserve the right to delete comments that are offensive or off-topic.

We are called to be "priests, prophets, and kings" in our own homes and workplaces, offering the wheat of our daily lives and becoming bread for others through lives of grace. We are called to be Bread Alive. My name is Deacon Michael Halbrook, and this blog will explore my own journey, as a husband and father of four boys, and as a deacon of the Diocese of Springfield in Illinois, serving the pastor and people of St. Elizabeth Church in Granite City as deacon, and coordinator of faith formation & liturgy.

Sign up to receive weekly emails with reflections or other blog updates.

I will never share your email with anyone else.